At the beginning of every month I like to set a few goals for myself - things I feel are important for me to accomplish. One my goals for March was to complete five cakes. Well this is cake number five and I will have another two completed by the end of the month. Things are going really well! 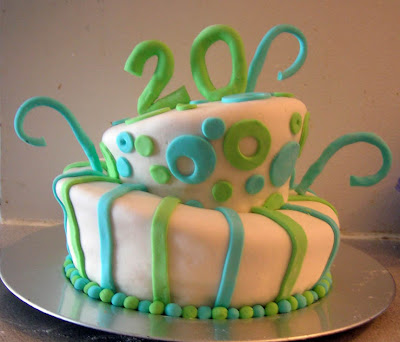 As it was cake number five, I thought it was time I step it up and try my first two tiered cake (BTW, this cake is a perfect example of how the overall design can dramatically change as I work on the cake). My original plan was to do a candy-themed two tiered cake, nothing too fancy. I thought it would be fun to include real candy like jelly beans and gumdrops, but then realized what's the challenge in that? So I thought it was appropriate to add a new challenging element, and I chose to make it a topsy turvy cake. I generally followed this tutorial on YouTube, but didn't chill it in the fridge after applying the fondant as most sites recommend not to. The bottom tier was made with three 9" layers, and the top had three 6" layers. This was my first time doing some significant carving so I really didn't know how well it would turn out. Also the tutorial recommends using a cake with a texture similar to pound cake...and I chose to use one of the most moist recipes I know (but people love it!).
After completing the first tier, it was time to place the top one on the bottom. I inserted candy sticks in the bottom cake to support the top. This worked pretty well, but once I cut into the cake I realized the top layer definitely sank into the bottom one. It really wasn't a big deal, but could be a potential problem if it was a three tier cake. I think the reason I had the sinking problem was because the cake wasn't very dense. In the future, if I'm to stack a moist cake like this again, I will use a piece of cardboard to separate and support the layers.
Once the cake was decorated with the green and blue fondant, I realized putting multicolored candy all over it would look tacky, so I opted to make it a 20th Birthday cake instead. Even though no one is turning 20, it's still another sample for my portfolio. Overall I'm pretty happy with the outcome. There are definitely some problems with smoothness, but considering the potential disaster this cake could have been, I'd say I'm pretty fortunate. 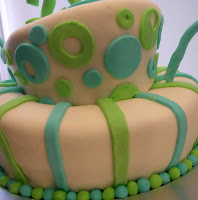 The top tier had a chocolate filling (used dark chocolate baking squares, don't know if the "dark" was that noticeable) and the bottom had peanut butter filling. I tasted this cake with my sister, and it was such a great example of how people can have different preferences. She LOVED the PB filling and actually disliked the chocolate. I was the opposite, thinking the chocolate was one of the best fillings I'd ever had. I'd say the peanut butter one was OK, but I would definitely never order it myself. 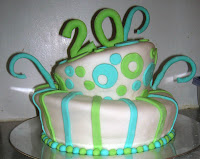 This one was pretty time consuming. Don't think I'll be doing another two tier anytime soon unless it's requested. Just baking the six layers takes lots of time. I don't have an industrial oven! I'll be lucky if my mixer survives the semester lol.
Couple more photos on Flickr.
Posted by Zach at 2:24 PM