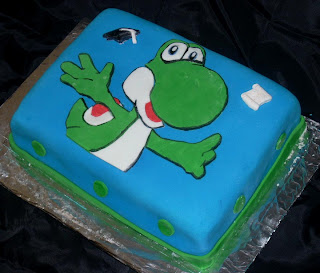 One of my friends works with kids and a couple of them were graduating this week. She said they loved Mario so I thought it would be a great theme considering I was wanting to make a Mario centric cake myself.
Yoshi is one of my favorite Mario characters, so I definitely wanted to represent him. I wasn't really sure on what type of design I wanted. I considered carving the cake into the shape of Yoshi (not 3D, not quite ready for that yet!), but then I would have a ton of waste which I wasn't really excited about. It would have been fun to try and sculpt Yoshi out of gumpaste and fondant but I didn't really have the time for that, so I settled on this flat image. Thank god for AC as the day was insanely humid and really affects the structure of all the sugar products. It ended up as a pretty simple cake but nice none the less.
Posted by Zach at 11:26 AM No comments: 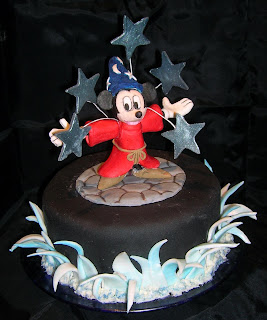 My least favorite decoration for the 'Under the Sea' cake was the snorkeling koala. He gave me a ton of trouble and I felt like I did the best I could, but really I knew I could do better with more experience. That inspired me to practice my sculpting again, and this time giving myself the challenge of a recognizable cartoon character. Sorcerer Mickey was and still is one of my favorite cartoon characters, and the level of difficulty seemed appropriate so I felt like he was a good choice.
Mickey is 100% edible and made of gum paste and fondant. I learned quite a few things while making him, a lot was really trial and error. For my first try, I sculpted the body and tried to drape the robe over him. That was clearly not working so I scrapped that and made each body part out of a solid piece of gum paste/fondant mix. After that I was having some trouble keeping his parts together. I first tried spaghetti, but things kept on slipping out. I then tried royal icing, and then egg whites, neither of which created a strong enough bond. Fortunately, after some help from Cake Central member KathysCC, I was able to stick him together using a lightly moistened fresh piece of gum paste between each joint. It worked perfectly!
The face was another big challenge, and while he could use some improvement, I am still pretty happy with his likeness. The robe, hat, and details were carefully painted using a mix of vodka and food dye. I didn't do the best job painting the hat as my first coat was a little too thick...oops. 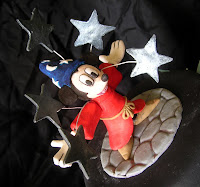 Once I had Mickey completed I needed a cake for him, so I decided to do something small and simple. I used a cookie cutter for the stars, and painted and attached them to floral wire. I used a cobblestone imprint for the base which I then painted in the cracks. The waves were made of white fondant/gum paste and colored using blue food spary. I added a shine to the waves using a mixture of corn syrup and vodka (sounds tasty :/ ), but that effect wasn't really picked up by the photos. Maybe a higher ratio of corn syrup next time. The smaller waves at the bottom were made of butter cream and then dusted with blue petal dust.
I will probably save Mickey for a later cake as these figures can last a long time when stored properly and it would be fun to do a really epic Disney cake. Overall is was a great learning experience!
Posted by Zach at 2:05 PM No comments:

Under the Sea Cake 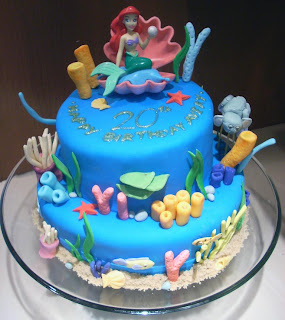 Wow. It has been almost a month since my last cake and entry. It's not that I've fallen out of love of making cakes, but I will be soon be heading off to make cakes full time as a job. Before I head off I'd like to take the chance to enjoy some other hobbies that I may not have the time for later. Luckily, once in a while an occasion pops up and gives me no choice but to make a cake. Most recently was my sister Avery's birthday. She actually doesn't turn 20 for another couple weeks but she will be leaving for a semester in Australia shortly so we decided to celebrate a little early. 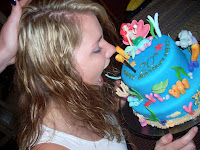 Avery has always been pretty helpful in bouncing off ideas on my cakes, so I felt she deserved a good one. She had a few themes she wanted, and I thought the under the sea theme was the best. The Ariel topper wasn't even in the original plan of the cake. After completing most of the work on the two sides I thought that Ariel would look perfect on top. Avery already had the topper from a previous store bought cake years ago. I did feel like it was cheating a little bit, but it just looked too perfect to pass up. 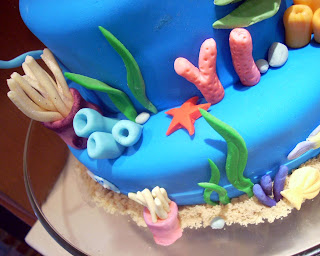 The biggest problem making a cake like this is that you can ALWAYS add more details (not like the Dragon cake, where less is more). While I am overall pretty pleased with the finished product, there are so many things I would add if I had more time. The sand was just sprinkled brown sugar and all the decorations were made of gum paste. I did include a little snorkeling koala on the side to represent her upcoming travels, but it didn't turn out quite like I hoped. He just wasn't drying fast enough and kept on falling apart. I wish I had a couple more hours to redo him real well but given the time constraints, this had to do.
I did have a little technical difficult with the top tier. I cut the board so it was exactly the size of the cake. Unfortunately, this meant that the fondant went over the board, so it wasn't supported by the dowels in the bottom tier...which led to a little droopiness. This is something I should definitely know by now, but I guess at least it is a mistake I will be sure to never make again!
The cake was all chocolate as it is her favorite, and the top tire included peanut butter cups in the frosting, and the bottom had cream cheese and Oreos. Didn't last long in this house...
Posted by Zach at 9:36 AM 1 comment: