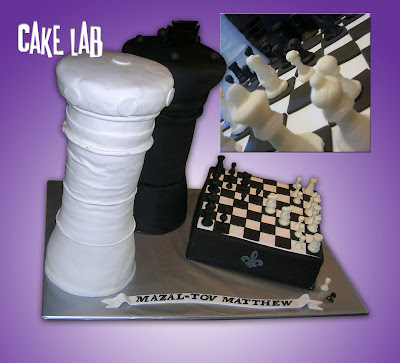 I don't even know where to begin with this cake...
One week later and it's still haunting me! I usually have a couple mood swings while working on a cake, but that's just part of the process. This cake literally almost brought me to tears multiple times (but for the record, no actual tears were shed).
The cake started off smoothly enough. Covering the chessboard was simple enough, but I first came across some trouble with the small chess pieces. I thought it would be a great idea to make them out of chocolate versus gumpaste because it's so much tastier. But that meant there was the extra step of melting the chocolate, pouring it in the molds, placing in the freezer and removing. Sometimes there were air pockets in them so I discarded them. The black chocolate presented another problem. You can't actually but black colored chocolate, so I bought dark chocolate and thought I could easily enough turn it black by adding black gel color to the melted chocolate. Not so fast. That stuff turned into a sticky gunk. I then tried dusting the brown pieces black and airbrushing them, but neither of those methods were effective. Then I learned that you could add a little bit of vegetable oil to the melted chocolate to help keep it a soft mixture and that worked pretty well, but still...more time lost and another couple steps.
After successfully making all the chocolate halves, each half needed to be warmed so the pieces could be molded together and the seam could be erased. Basically just took way more time then I needed.
The night before the cake was due I stopped working at midnight. Unfortunately the thought of chess pieces couldn't leave my mind so after an hour or so of tossing and turning I decided to go back to work till 4 am. This may not seem like a big deal to most, but I never stayed up so late for an exam during my 5 years in college. I was clearly stressed.
Once I got to the big pieces, things were going pretty well and I was feeling pretty confident. As I was covering the black piece, I noticed the white fondant on the other piece was beginning to sag. My heart just sank. The finish was so smooth earlier, and now it just looked like crap. I wanted to redo it but not enough time.
I had a whole scene planned out, with cool a cool 2D gumpaste knight and bishop and a medium sized rook made out of rice cereal treats that would all be scattered around the board to make it look complete. But the only accent I finished was the knight, and without the other pieces it didn't look like it belonged, so I decided to leave it behind as the client was only expecting the chessboard and pieces anyway. The last couple hours I was just a wreck. I realized there was no way I was going to be able to complete all the accents I thought were so cool and I was barely going to finish making the big pieces look acceptable. Even writing this now is making me feel depressed all over again!
Right now I'm working on three cakes for the week. I feel like I have to work extra hard to prove to myself that I can make really cool cakes that I can say I'm proud of. But no matter how great those cakes turn out, it still won't make up for my failure. However, what's done is done and there is nothing I can change, so I just have to move forward with these next cakes and learn from this experience.
Grr...this "fun" job is stressful.
Posted by Zach at 8:55 PM No comments: 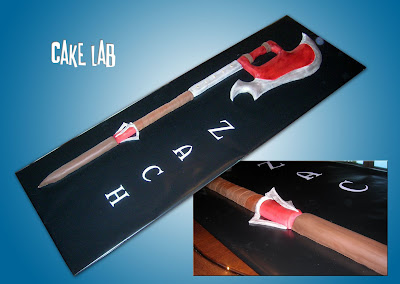 It was my birthday earlier this week which meant I had the chance to make a really cool cake for myself. Normally I enjoy working on just about every cake I make, but it's extra fun when I get to make something based on one of my own interests.
This Slayer's Scythe cake was the perfect selection, as it allowed me to make a big sculpted cake (my favorite type), without needing a ton of cake. I decided to make the handle out of brownies since it was so thin, and I like brownies more than cake anyway!
It was fun making the cake section by section. I tried to give the wrap a leather look by rolling it over plastic wrap. It did give me the exact texture I was looking for, but I had time making it as noticeable as I wanted. And gotta love my new extruder for the rope, such a useful tool and I've used it on just about every cake since I bought it! 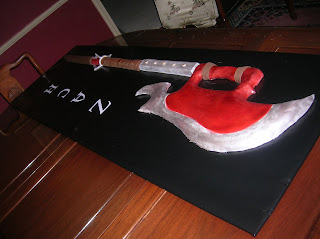 The only challenge I had with the cake was figuring out how to get the blade silver and red while using the same piece of fondant. I decided to roll white fondant over the cake and then covered the part I wanted silver in blue masking tape. I then airbrushed the cake red, removed the tape, and dusted it with silver petal dust. Not as difficult as I thought! 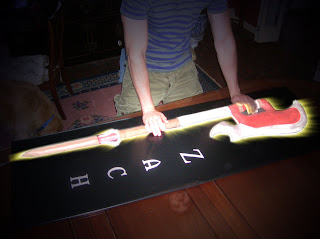 Oh and I had to have a little bit of fun in photoshop with this cake :)
Have some really cool cakes coming up in June and this was the perfect way to start the month!
Posted by Zach at 1:14 PM No comments: 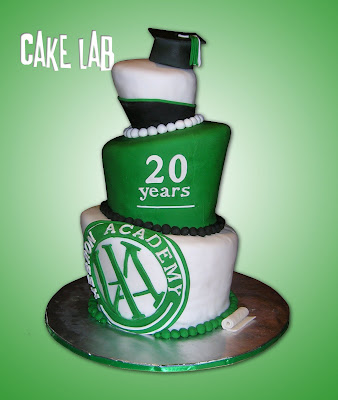 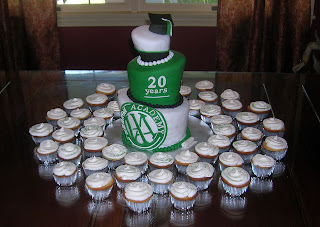