Past Cakes: Getting Smoother

After the first three cakes I was on a roll. I really started to get a feel for using fondant.
. 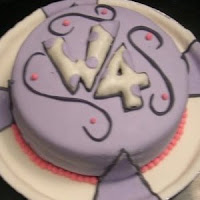 This was another request by my sister Avery. She was having a floor party (they were on W4) so she just wanted something saying W4. Making the W and 4 was kinda interesting but not too difficult. I sketched out the shapes I wanted, then took some warm cake shavings and molded them into the sketch. After allowing it to dry a little, I then covered them with fondant.
I didn't really have a clear idea for the design of this cake (which is why the polka dots are kinda out of place). My original idea was to do something Willy Wonka-ish, but the purple I used didn't get as dark as I wanted. When I saw the teal next to the violet (thank god I now have leaf green dye!), I had to change it up a bit. The cake was placed on a cheap metal platter that I didn't want shown so I covered it with fondant. That was the last time I ever did that! Way too time consuming. 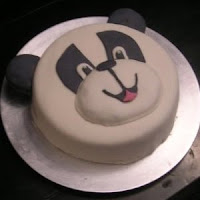 This cake was actually pretty simple and turned out nicely. I used cupcakes covered in fondant for the ears. Unfortunately you can't get a real good black color when using dye on white fondant, but I will be buying black fondant in the near future. Really looking forward to using it in a lime green/black/white combo! 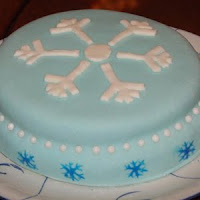 This was the cake I made for my families Christmas eve dinner. It's not bad, but definitely not what I was planning on! I wanted to do a set of presents, and spent a good few hours baking and prepping for that design. Unfortunately I didn't cool the cakes before carving and I was just not getting the product I envisioned. Well you live you learn!
The blue snowflakes were made with a blue gel pen and toothpick.

I have three cakes planned for the weekend, all of which I am very excited for. I already have gumpaste sculptures ready for the second cake, and baking starts tonight. Yay cakes!
Posted by Zach at 2:46 PM