I normally don't take half a week to blog about a new cake but I've been really busy recently. For the past few days I've been working at Truly Jorg's Patisserie in Saugus, MA (a Food Network Challenge competitor!). They had a busy week and needed some extra help so I figured why not earn some cash and learn a few things. It was a two hour drive each way but I really enjoyed myself and am grateful for the experience. Now I have some time to get back to my cakes (I have one half finished that I haven't touched since Tuesday! Don't think I'll be eating that one)
My first blog entry was actually for a Glee cake. It was a pretty simple cake and I've learned a lot in the months that have passed so I figured the second season premiere was a good chance to see what else I could come up with.
There were a lot of firsts for me with this cake, and while not everything turned out quite as well as I hoped, I'm not terribly upset and did learn a few things. The hand was made out of rice krispie treats, my first time using that medium. I brushed them with a bit of melted chocolate to firm them up and then layered with buttercream before covering in fondant. With all those layers it ended up a little bulkier than I imagined, something to keep in mind next time I'm shaping the treats. This was also my first time using hexagonal pans. A little more challenging than the standard round pans because all the corners that need to be sharp, but this was good practice. This is also the first time I was able to use my new airbrush. It worked pretty well on the red and blue blocks, but I didn't do it quite right on the smaller ones...takes a little getting used to. Definitley a useful tool that will add more dimension to my future cakes. I'm pretty happy with the way the cast sillouettes, stars, and slushies turned out, but I need to cut the fondant differently next time I'm going for the "pop out of the cake" look.
So yes, I do see a lot of flaws with this cake, but I was able to step it up from my last Glee cake and learn a lot, so I still love it! Plus the new banana cake recipe tasted awesome.
Posted by Zach at 7:58 PM No comments: 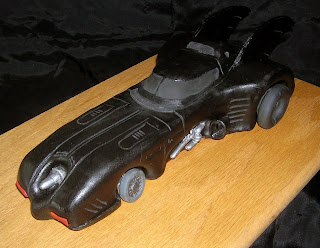 Monday night I decided to try a new recipe for a peanut butter cake. There were so many possible cake ideas in my head, but I felt a lot of them would turn out better if I had an airbrush (getting my first in 5 days!!!).
As I was browsing cake photos I saw a thumbnail that made me go "is that the batmobile?". Alas, it was not, but I thought "what a great idea!". Not only do I get to make a superhero cake, but I also get to try making a car for the first time.
This cake is based off the 1989 movie, and thanks to flickr member FLG8R for supplying me with reference pics. There's a lot of details from every angle so the photos were very helpful.
Since there is such a transformation during the process of making a sculpted cake, I decided it would be fun to include some progress photos. Trying my hand at making different types of cakes is a good way for me to be able to estimate how long it will take me to do a cake. Even though the size of this cake wouldn't feed many people, a larger cake really doesn't take much longer because you still have to do just as many details. If anything it might be easier to make a larger version because the pieces aren't so damn tiny.
Overall I'm really happy with this experience. Wish I had done a few things differently but there's always next time! Soon it will be time to prep a couple cakes so they will be ready for finishing touches when I get my airbrush. Can't wait! 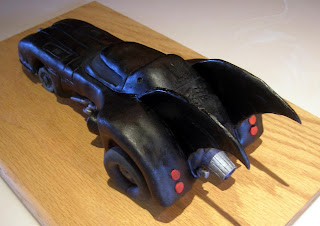 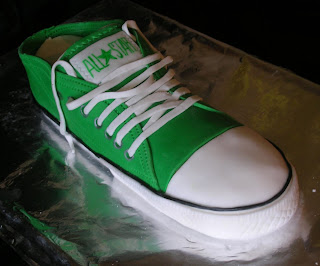 I decided it was time to up the difficultly level on my cakes. The Celtic one went surprisingly smoothly, given the fact that I had little practice this summer. Maybe it has been the crazy amounts of cake TV I've been watching (favorites are Amazing Wedding Cakes, Food Network Challenge and Ace of Cakes...and the 4 episode Fabulous Cakes was pretty cool too)...but maybe I just kinda absorbed some good technique...haha who knows.
Anyway, shoes are a popular cake choice, so I chose a green Converse sneaker for my first 3D sculpted cake. It did take me a few tries to get the look I was going for. Actually after my first carving attempt I realized I had cut off too much cake, and I had already thrown away the scraps (to save myself from eating them!). Fortunately my partially consumed Celtic cake was sitting just a few feet away, so I cut off a couple slices and molded it onto the shoe form. 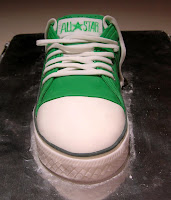 It was a ton of fun watching the lump of cake slowly begin to look like an actual sneaker. I must admit it's going to be a little sad digging into this one, or just throwing it in the trash if no one eats it, but it was a great experience and I can't wait for the next 3D cake. Already have a ton of ideas, the hardest part is choosing which one to do!
Posted by Zach at 12:25 PM No comments: 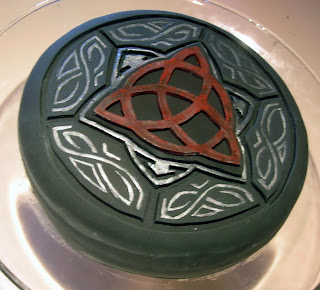 The cakes are back! I took some time off from making cakes for a couple of reasons. First of all, the house has had people coming and going but there has been no event that might require a cake, and I don't always feel like making a cake for no apparent reason when my family won't be around for long periods of time. Another big reason is that I like to be very careful about what I eat, and I am usually very disciplined...but there is no way I can say no to a delicious dessert sitting on the counter!
Finally this week I caved. I was home alone and cleaning out the cupboards and found a cake mix that was about to expire. I have never actually used a cake mix for one of my cakes before, but I figured this either has to be used now or end up in the trash, so why not take advantage of it? I actually made the Celtic triquetra symbol out of gumpaste about a month ago. It was originally going to be used for my attempt to make a book cake. Unfortunately the book had to be fairly large to give the effect I was looking for, so I opted to use a "fake cake" instead. I found that a large cereal box was just the size I needed. I ended up icing the box but the corners were so sharp, decorating it would really not have been anything like decorating a real cake, so I didn't really see any point in continuing. 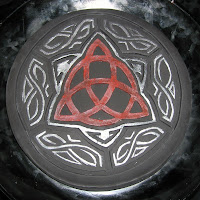 I decided to make use of what I had and ended up with this. The cake was actually covered in two layers of fondant, and pieces were then cut out of the top. I had seen this technique on tv a couple times, and it really added another dimesion to cake.
I was a bit nervous about the surrounding design. It was all done free handed which meant it was easy to make a mistake. The silver design is just something I came up with, but I think it looks Celtic enough!
Yes, this is a pretty dark cake, but it's exactly the type of cake I love! A true ZacO creation! My next cake will be much "happier" lol.
Posted by Zach at 3:23 PM No comments: