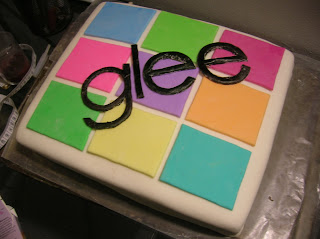 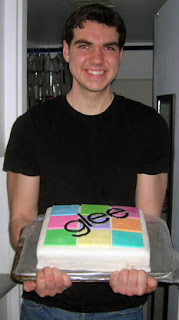 This is my 10th time working with fondant, and the cake was inspired by one of my favorite current shows, "Glee". The design is fairly simple, but the real challenge was trying to keep all the lines sharp. The squares were cut with a pizza cutter and I had printed out a sample of the logo and cut around it. The letters were definitely the most challenging aspect of the cake. My original plan was to have a set of white letters and a set of black letters that would be offset underneath the white to give the appearance of a shadow. Well, after completing the white letters I didn't think I'd be able to replicate them in black (not to mention, when working with dyed black fondant it is much stickier and difficult to work with). Instead I settled with just the white letters. I put it on the cake, but it didn't look quite right, so I used a black edible ink pen and colored over the letters which resulted in a fairly good product. Originally, I had also wanted to include little sculptures that represented the show, but I realized sometimes simplicity is better. Next time I make a Glee cake I will have a little more fun!
The cake itself is chocolate. I used Hershey's Simple Cocoa Layer Cake recipe, one I have used numerous times before. It isn't my favorite chocolate recipe, but it is not too crumbly making it easy to carve. I'd say it was definitely a good choice for carving, but I will try something a little more moist next time.
The filling was a mix of margarine, cream cheese, powdered sugar and chunks of Oreos. The cookies were definitely a good addition and added a little more texture to the cake. The outer frosting was a basic buttercream with some Oreo pie crumbs mixed in. Overall the cake was pretty tasty...and pretty big! Fortunately, I had lots of help eating it...thank god!
Next cake will have an Easter theme. Already about halfway done :)
Check out more photos of this cake on Flickr.
Posted by Zach at 9:58 PM