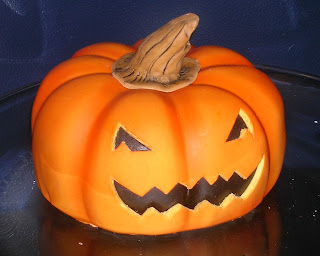 October!
Unfortunately that means I'm borderline depressed due to the fact that the time for shorts and soaking in the sun by the pool is over, but at least there is one good thing about the change in seasons...Halloween! It's one of my favorite holidays and the perfect excuse for making some creepy cakes.
I've wanted to make a Jack O Lantern cake for so long but haven't had a reason or the tools to make a really good one. Now that I have my airbrush I can do the cake justice. 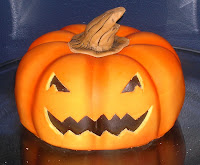 The carving of this cake was pretty simple, especially compared to my recent Batmobile cake. I mean, who really cares if it's not perfect because every pumpkin is different. I knew it would be a good idea to use two layers of fondant on this cake to give it some realistic dimension. The other options would be to either paint on the face of cut out black pieces and stick them on, but it definitely wouldn't give the same result.
I've been using pre-made Satin Ice fondant for most of the summer, and had attempted to make my own black marshmallow fondant in the past with poor results. Large quantities of dye are required to get a black color, which really messes up the consistency of the fondant and it never really looks black anyway. BUT I found a recipe online that includes chocolate chips and cocoa powder in the fondant, and it gave me a pretty good color. Not only did I like the texture and color, but it also tasted kinda like a Tootsie Roll!
After covering the cake in black fondant I put on a layer of yellow. The yellow fondant was then airbrushed with orange, brown and copper colors. I went a little bit heavy on some of the copper areas but I'm really enjoying using the airbrush and this cake provided good practice. Once painted, I cut out the features and that was pretty much all there was to it!