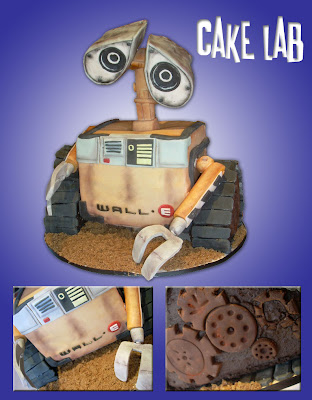 After a couple "cookie cutter" cakes with the cricut, I thought it was about time I do something a little more challenging and fun. Wall-E seemed like the perfect choice.
Before I began working on the cake, I looked up other people's work to see how they took on the challenge. As with most cakes, there were some crazy cool ones, and some not so awesome ones. However, even the really great cakes I found had Wall-E bright yellow. While watching the movie (I usually like to have the film inspiration on in the background while I work), I noticed Wall-E is barely yellow at all, and if anything he is kinda flesh toned. I really wanted to get the color right so added just a bit of copper, brown and yellow dye to the fondant. I then airbrushed him slowly with the same three colors, and added some detail with red, black, and moonstone petal dusts. 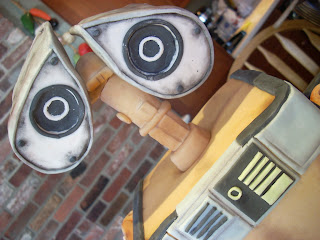 I brought Wall-E into work so I didn't have to throw him out (or if he stayed home, he'd probably spend the next couple months on my counter!). He was a big hit there, but he didn't make it there 100% in tact. I don't know why I didn't think of it sooner, but using either melted chocolate or sugar would have worked as a great glue between the fondant treads and buttercream on the wheels. At least I'll be ready for the next time!

As with my last 3D cake, I took some progress photos and posted them in a Facebook album.
Overall I think it's my favorite cake to date, and I would love it if I was commissioned to make another as there are a few things I'd do differently to make him a little more accurate.
Posted by Zach at 6:21 PM