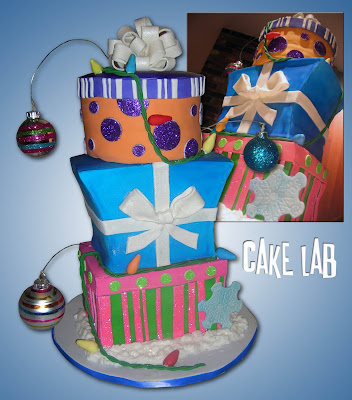 Two years ago my cake hobby was still really new. That Christmas I decided to make a real elaborate cake scene consisting of five presents (one for each member of my family). It was a pretty huge disaster. I tried carving for the first time and everything fell apart (NEVER carve a warm cake), so I ended up starting over and making a simple snowflake cake.
Two years later and I have come a long way...which I should hope so, otherwise this path would seem pretty pointless. Not only are these presents bigger, but they are stacked and one is shaped. I'm also now a big fan of paneling the fondant for squared cakes. The angles are so much sharper than when you drape fondant. 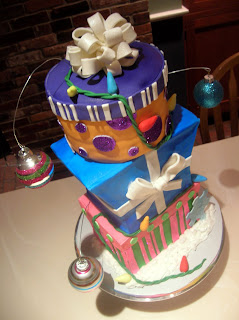 All the details on the cake are edible, although I did decide to include real ornaments basically just to save time. it would have been cool to make them out of cake balls, but after a while I run out of steam. In terms of the overall look of the cake, I'm not really that satisfied. I had a really hard time coming up with a design for the top tier. Originally it was white and sprayed silver, but I wasn't really liking that so I airbrushed it red and applied white snowflakes. It was nice, but a little too traditional so I tore off the fondant and started over. I think I probably would have been better off keeping in the pink/green theme. Either way the cake was a hit with my co-workers. A fun, colorful cake for some fun people!
Posted by Zach at 7:59 PM