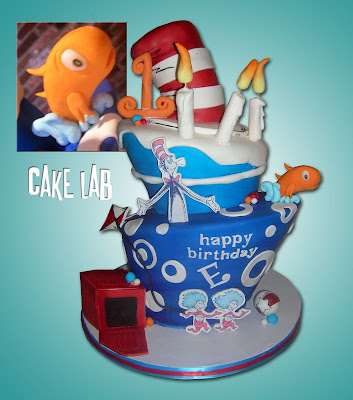 Last February I made a Cat in the Hat cake for fun that was based off another shop's design. The resulting cake felt bland and uninspired. This week I was pretty excited to have the chance to right my wrong. The client sent me some photos of two cake designs to choose from. After learning from my mistake I told them I would rather not try to mimic their preselected designs, so they said as long as it was topsy turvy and Cat in the Hat themed I had free reign.
After baking the cake (which required LOTTTS of strawberries), the first thing I sculpted was the fish. Originally I had found a small glass candle holder that the fish was supposed to "fall" out of, and I brushed it with blue piping gel for water. It looked cool but I put it aside till the end.
All details on the cake are edible. Rice cereal treats for the hat and box and icing images for the characters. In terms of difficultly, nothing gave me TOO much trouble. The worst part was the structure of the cake. This is definitely the most extreme topsy turvy carving I've done. In fact if you looked at the side/back it would look almost like it really would tip over...which I guess is the point, but I liked the angles I picked for the front of the cake better. 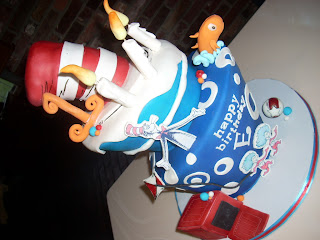 When I reached the end of placing the details on the cake, I almost forgot about the first thing I made! In my original sketch the fish was supposed to be on the top of the cake, but there was no room for him with the hat and the candles. I placed him on the bottom right but that interfered with the flow of the cake. The only option I could think of was to cut him up and stick him on the cake. I added some fondant wave accents and I'm actually really happy with the way he ended up.
So far I have yet to have a caketastrophe, but this one definitely made me nervous. The only reason I had this order in the first place was because the original baker's cake collapsed in the fridge and I was a last minute backup. Every time I left the cake I held my breath upon returning, hoping it would still be in one piece. Extra thick cake board, generous amounts of royal icing, and sturdy dowels helped keep the cake in one piece.
In the end I think it might just be my favorite cake so far. Actually kinda sad to see it go haha. I guess I have a love/hate relationship with my cakes. My least favorite part is always the beginning...baking, carving, icing, covering in fondant. I really don't start to relax until the cake is on the board and details are being added, but by that point I am pretty tired from the 5-6 hours I already put into the cake. I'm hoping one day I will have someone to help me with the grunt work!