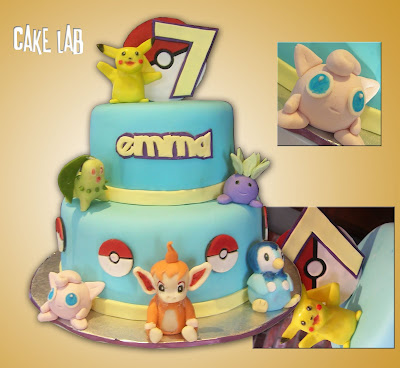 The Pokemon craze has died down, so I was really intrigued when I got a call about doing a Pokemon birthday cake.
The design of the cake is pretty simple, and most of the effort was put into making the figurines. Pikachu, Chimchar, and Chicorita are all made of rice krispie treats covered in modeling chocolate, while Jigglypuff, Piplup, and the purple plant pokemon (not sure on its name!) were made of fondant. It's been a while since I've had the chance to sculpt little figures so I really enjoyed making these. I also learned that a great way to glue pieces of the figures together is to use melted chocolate. The white chocolate was also used for details in the eyes...finding lots of uses for that stuff!
Posted by Zach at 12:11 PM