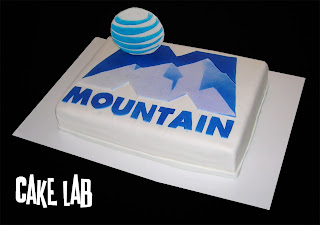 This week my cakes had a bit of a theme: company logos! Some were definitely a bit more challenging than others.
First up was made for a Maine company titled Mountain. The M logo was pretty simple, and there's no way I could have done it without my airbrush. Unfortunately my airbrush was giving me some issues so I decided to take it apart to clean it...well those things have a ton of intricate parts and I spent way too much time trying to reassemble.
The AT&T logo was also pretty basic, but I spent a bunch of time trying to make it 3D out of rice krispie treats and modeling chocolate. Making a sphere is difficult enough, but the AT&T lines are not so simple and trying to replicate them presented me with quite a challenge. I tried my best but time was running out so I went with the 2D version. 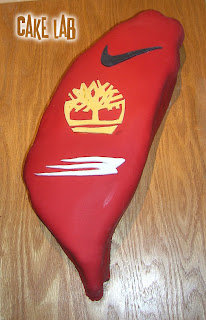 This week my mom was meeting a few friends from our days in Taiwan. She wanted me to make a cake but didn't really know what, so thought why not do a cake in the shape of Taiwan with the logos of the companies that were responsible for them all being there.
When she saw the cake she said "it looks like a fish!", but I said it is what Taiwan looks like. Not the most creative cake and didn't really learn much but I did what I was asked!
Posted by Zach at 8:51 PM