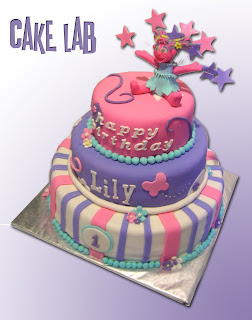 It was only a matter of time before I was asked to do a three tiered cake. My first attempt was for a babies first birthday.
If you're not familiar with Abby Cadabby, she is a Sesame Street character. Who knew?! Guess there is a new generation of Sesame Street fans out there.
The tiers were strawberry cake with vanilla buttercream, vanilla cake with cookies n cream buttercream, and chocolate cake with mocha buttercream. Have to say with all this mixing I was extremely relieved that my first ever stand mixer arrived in the mail last week (a 5.5 Q Cuisinart...a late grad gift from my parents!). It probably saved me at least an hour or two of work. 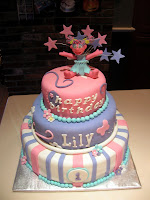 The plan was to initially use a plastic topper for Abby, but after completing the cake I had a few hours left the night before so I decided to try it out of gumpaste and modeling chocolate. It's not my best sculpture but it was really just getting some more practice in and giving the parents another option.
Once I began stacking the cake I realized that it was getting pretty heavy. I kept on wondering if the cake would survive the transport, and had continual visions of hitting a frost heave, looking back and seeing my cake collapsed. Fortunately it made it to it's final destination in one piece and I was able to breath a sigh of relief.
Posted by Zach at 10:20 AM