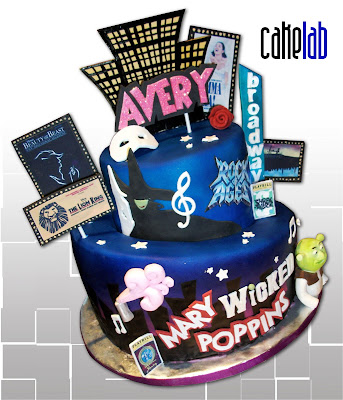 As I've been going through my past blogs I noticed I never posted about this one!  Probably because I was so busy at the time as this was a Christmas present for my sister.  I have a hard time at Christmas.  It's really kind of a pain shopping for people just for the sake of shopping, hoping you will stumble across something that's personal and won't break the bank.  My sister Avery helped me with my designs and tastings when we lived together in Montreal, and it had been ages since we had been together to celbrate a birthday of hers.  I figured why not give her a gift that's totally personal and from the heart.
She's a huge Broadway fanatic so the choice was pretty easy.  She's literally seen Wicked at least five times, possibly up to ten for Rock of Ages.  All the decor on the cake is edible, minus the posts used for the signage.  My favorite part is the city scape on the bottom tier.  I love the way it turned out...unfortuantely it's kinda easy to look past it since it's covered by a lot of decor.
Avery didn't really appreciate it as much as I had hoped but a year and a half later and I don't regret my decision :)
I look forward to making another Broadway themed cake in the future.  There's just so much potential!!
Cake Lab San Diego
Posted by Zach at 6:37 PM