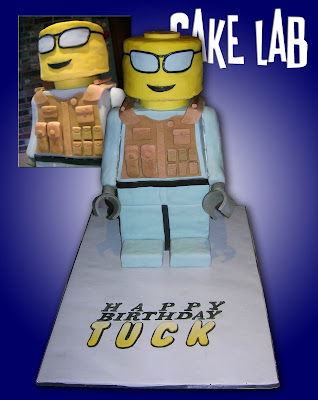 I've made a few vertically daring cakes in the past year, but when I heard about a standing LEGO character I was definitely worried. All of my tall cakes have been pretty equal in terms of width and depth, but the LEGO man is much wider than he is deep. I really wasn't sure if this was something I would be able to pull off.
To increase the cakes survival during delivery, I decided to make the cake deeper than I would if I were to make it to scale. Generally I like to keep the cakes as close to scale as possible, but I feel if I did on this one it would have resulted in a unstable cake. I don't think the increased depth distracts from the look of the cake.
I also kept the head removable so it could be transported in a box separately. Arms were maded of rice cereal treats with fondant and gumpaste accents. Have to say these type of cakes sure do stress me out, but it's pretty cool to pull it off, and no collapsed cake so far! *fingers crossed*
Posted by Zach at 9:41 PM