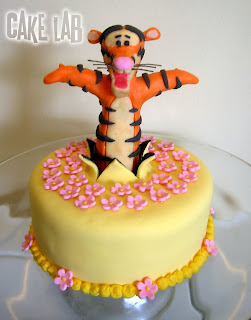 It's safe to say that most of my recent cakes have been on the darker side, but I really want to show some diversity in my designs so I have three girly cakes coming up this week (then maybe I will follow up with another scary one :) ).
After using modeling chocolate for the first time with The Beast cake, my mind was swarming with new ideas as the medium is so different from fondant and gumpaste and allows many more options. I thought Tigger would be a fun character to try as he is popular and is the "coolest" Winne the Pooh character in my opinion hahaha. He is made up of rice krispie treats covered in modeling choclate. The only thing unedible is the wire for the whiskers.
In my recent glee cake I had attempted to make a hand look like it was popping out of the cake. I was not at all pleased with the results so thought I would take this opportunity to get it right. I first placed a circle of black fondant on the cake where I wanted Tigger to pop out (thanks to some members from CakeCentral for the suggestion!), and then covered the whole cake in yellow. I began to cut the strips and things seemed to be going perfectly, not to mention it was one of my cleanest covering jobs, but as I lifted the flaps the black fondant stuck to the yellow and began ruining the buttercream. I think this happened because I used homemade black fondant which is a little stickier than usual. Fortunately I was able to salvage it and achieved the effect I was looking for. 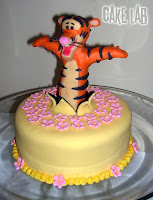 This was my first time piping beads around the bottom of a cake. I have made fondant balls before, which is more time consuming, but also easier to avoid mistakes. It takes some practice but it's a skill I need to master so this cake got the treatment.
While it's not totally a "me" cake it was a lot of fun and very good practice.
Posted by Zach at 6:15 PM